From Don't Starve Wiki
Jump to: navigation, search
“A relic of an ancient civilization long dead from the ravages of time.”

The Ruins are the last remnants of a forgotten civilization located on a level below Caves. They are generated as a new world upon entering them, just like caves. Ruins have their own theme, terrain, and biomes. Various unique creatures, plants, and other objects reside within.

The entrance to the Ruins are in the Caves. Each Cave connects to a different Ruins world. Similar to Sinkhole Rocks, they resemble a pile of Thulecite, which is found in the Ruins itself. It is tinted orange, with similar characteristics of the Sinkhole when being mined. 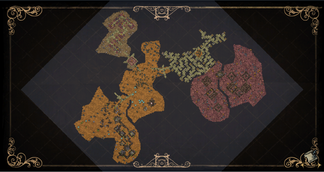 The ruins have six different Biomes: Abyss, Labyrinth, Military, Sacred, Village and Wilds. The Ruins can only be entered through a plugged Sinkhole found in the Caves. Upon mining the Thulecite plug, a rope will lead down to the Ruins through the Sinkhole, and Batilisks will be able to spawn from it into the Caves.

The initial starting area of the Ruins is surrounded by four massive pillars and four Broken Clockworks, with a rope leading up to the Caves. The Ruins are completely dark, causing a steady drain on Sanity. Unlike the caves, the ruins are considered to be in a state of perpetual night, creatures and plants will act accordingly. As the Ruins are explored, the map will show new icons and terrain specific to the Ruins.

Earthquakes will occur in the Ruins, dropping the same minerals as in the Caves. Although time continues to pass on the surface world, there is no indication of this while underground.

The Ruins exist in a state of flux called the Nightmare Cycle, which can be measured by the Thulecite Medallion.  As the magical state becomes more intense, the likelihood of earthquakes increases. Its current state will affect the state of objects within it.  Nightmare Lights will begin to open up, the Runic Turf will glow red, and Ancient Statues will have a horrified look while Nightmare Fuel drips from their mouths and eyes. Shadow Creatures can attack the player regardless of their sanity level during the most intense stage. Splumonkeys also turn into Shadow Splumonkeys during the most intense stage. This is a great way to collect Nightmare Fuel, but is a bit overwhelming at an early stage in the game. The runes on the ground do not provide a light source despite glowing brightly.

The following creatures can be found in the Ruins: 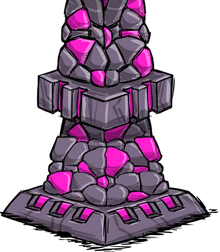 Some of the ground and pillars in the Ruins are made out of a special material that starts to glow when light is shined upon it during the Nightmare Phase. The Military and Sacred biomes are mostly covered in this material. Also somewhere in the ruins there's a labyrinth, filled with Dangling Depth Dwellers, Ornate Chests and dead ends. At the center of this labyrinth resides the Ancient Guardian, who most players will challenge to get its rare Horn.

Unlike Caves, surface plants like Evergreens, Saplings, Berry Bushes, Spiky Bushes, and Flowers are not found in Ruins, although the player can still plant these items. Plants will regenerate after a few days of being harvested (except for trees). The only plants that can be found naturally in the ruins are Light Flowers, Cave Banana Trees, Ferns. Lichen is also exclusive to the ruins. Blue Mushrooms can be found here as well, usually in copious amounts.

An Ancient Statue during the Nightmare Phase

Within the entrance of the Ruins, corpses of the Chess Monsters can be found. When destroyed, they yield 1 Frazzled Wires, as well as potentially Gears and other trinkets.

In the multiplayer expansion, the ruins were moved to the same level of the Caves. This was done to avoid the necessity of a third dedicated server to hold it on. There are also several new ways for entities to spawn. The ruins are also renewable by killing the Ancient Fuelweaver form of the Reanimated Skeleton. In addition, the Sacred biome is changed to have several "islands", and bridges connecting them.