“The heat is too intense!”

“I am miserably hot.”

“The ambient temperature is high.”

“My heart can't stand the heat!”

“This heat is unbearable.” 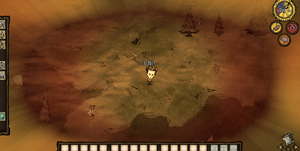 Overheating is a game mechanic found in the Reign of Giants and Shipwrecked DLCs, functioning as the counterpart to Freezing in Winter. Overheating happens during Summer or Dry Season. Overheating can also occur while the player is standing close to a fire source at maximum fuel, for a long period of time. When the player begins to take in too much heat (at 65°), the edge of the screen will begin to turn orange and become a hazy ring while a warning sound plays (much like freezing leaves ice on the edges of the screen and crackles). At 70° an orange haze will appear around the player's screen, and a sizzling sound will play, much like the crackling sound when Freezing occurs. The character will make a quote (eg. "Hot as heck!") and the screen will gain a reddish ring within the orange haze. The player will then begin to take damage. The only way to stop this is by cooling off, such as being near a sufficiently cold source. 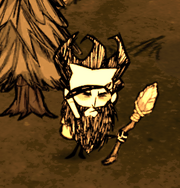 Wilson overheating from his beard.

There are several ways to cool oneself down:

There are several ways to delay overheating: