From Don't Starve Wiki
Jump to: navigation, search
NPCCharacter
“Say pal, you don't look so good. You better find something to eat before night comes!”

–Maxwell, when greeting the character

Maxwell (William Carter) is an NPC that appears during the beginning of the game, telling the player to start gathering food to not starve, before disappearing into smoke. He looks very tall and sinister, wears a dapper tuxedo, and holds a cigar while talking to the player. He is the main antagonist of the game, and is the one who transfers all Characters to the world of Don't Starve. During exploration, players can find Maxwell Statues or Chess Biomes themed after him. He seems to be a part-human, part-demon being. This becomes more and more apparent as Adventure Mode goes on.

In 1901, a tall and nervous British man named William Carter boarded a ship from London to the US, with hopes of pursuing a career as a magician in New York City. Three years later after his career appeared to be a flop and was in debt from unpaid props for his shows, William decided to move west to San Francisco, California. After his train crashed into a circus wagon, William went missing and was presumed to be dead. After escaping from the accident still alive, William discovers a book named Codex Umbra, which contained knowledge of powerful dark magic involving shadows. While he was deciphering what it read, his mind was opened up to new possibilities for magic. He took this new knowledge of magic and began to incorporate it into his magic shows, and went under the new stage name "The Amazing Maxwell".

After settling down with his newly found alter ego and knowledge, Maxwell met a woman named Charlie who applied to work as his assistant for his magic shows. Their magic shows appeared to be successful, creating very convincing acts using the knowledge Maxwell acquired from the book he discovered. Later in 1906, Charlie went to Maxwell's apartment after not hearing from him in a few days, but instead of finding Maxwell, she discovers his hidden "study room", with various symbols and incantations crudely scratched on the walls. Among these, the phrases "Enough", "It's them", and "Charlie" were also scratched on. She ran away terrified after seeing this, but came back to slide a letter under Maxwell's door acknowledging the room and suggested they take a break after their next big act.

Later that night, Maxwell and Charlie were to perform their big final act, wherein Maxwell would pull a shadow from the mysterious book. After making the book appear out of nowhere in his hands, Maxwell reached inside a page, but instead of pulling a shadow out, something inside of the book was pulling him in. After breaking free, a glimpse of the Shadow Watcher appears, the book turns to a blank page, and Maxwell and Charlie are grabbed by shadow hands and pulled into the realm of Them. It's unknown exactly what happened right after they were captured. Ultimately, Maxwell was put on the Nightmare Throne and would transform into the part-human, part-demon creature he is today, pulling people into the DS world. Charlie would become the monster of the night, killing unsuspecting people in the darkness.

Maxwell will only appear again in Adventure Mode. Maxwell will come to greet players at the beginning of each world, like in Sandbox Mode, but now he is wearing a dapper cloak instead of a tuxedo. He will say different things in each World and will get angrier and angrier as the player progresses. Maxwell's anger seems to weaken him; as he becomes more furious, he starts to deform.

In the last Chapter of Adventure Mode, "Epilogue", players will finally confront Maxwell. They will be teleported to a dark and dead wasteland, with a hallway in the center. At the end of the road, players will reach Maxwell's Hall. A deformed Maxwell is sitting in a large chair with a phonograph nearby playing music. When meeting Maxwell, he will start talking, telling the player that when he got here there was nothing but dust, and "them" and that he doesn't know what they want, that they are just watching. If the player attacks Maxwell, then the throne protects him (a lightning bolt will strike the player and destroy their weapon), and Maxwell tells the player that the throne will not allow it. He then tells the player that he has been around here for a long time, and that the player can either put the key in the lock or stay around and keep him company.

When players approach Maxwell in the throne, he will say a line. Players have to click on him to read all the lines. Once he says all the lines listed below, excluding the Gramaphone ones, all he will say is "...".

In the multiplayer version, Don't Starve Together, chronologically the events in the game happen after the completion of Adventure Mode. Because of this, Maxwell is surviving in the world with all the other characters and does not appear at the start, instead characters spawn from the Florid Postern.

“A fancy suit is no match for my muscles!”

“I feel a strange kinship with him.”

“HE IS AN UNKNOWN”

“What a rude gentleman.”

“Arrg! Is that the antagönist tö my saga?!”

“That jerk tricked us.”

Maxwell (AKA William Carter) is one of the two playable Characters that are not unlocked via Experience in the Don't Starve base game. The de facto antagonist of the game, if freed at the end of Adventure Mode, returns to his dapper human form, being sent to one island of the Don't Starve world.

In addition to his journal on "Them", which allows him to fragment his mind, Maxwell starts off with his own fighting gear and valuable items. Being a dapper fellow, his Sanity constantly increases over time. To make up for that, Maxwell only has a maximum Health of 75 points. Maxwell's playstyle revolves around his Sanity, being able to manage it very easily, and the aid of his Book.

Players can only unlock Maxwell by completing Adventure Mode. After beating five consecutive Chapters (escaping from five randomly-ordered and themed Adventure Worlds), the player will find themselves in the Epilogue Chapter. Once there, if the player chooses to take pity upon Maxwell, they can attempt to release him from imprisonment in the Nightmare Throne by inserting a Divining Rod into the throne's Nightmare Lock. Once this happens, Maxwell becomes a playable Character. 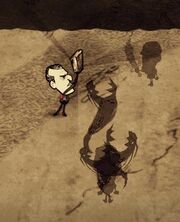 /min because of his dapper style. He starts the game with a Dark Sword, Night Armor, Purple Gem, 4 Nightmare Fuel and his own Book called the Codex Umbra.

Codex Umbra acts similar to Wickerbottom's books, but has an infinite durability. Upon reading it, a Shadow Puppet with the silhouette of Maxwell will appear. Using the Book costs 15

, 2 Nightmare Fuel and 55 maximum Sanity . Due to this the player may have up to 3 puppets, at which point Maxwell will have 35 Sanity and will be unable to spawn more. The Shadow Puppets will live up to 2.5 days before dying off. They will aid Maxwell in combat, and assist him in mining and chopping down Trees. Upon death of a Puppet, Maxwell's maximum sanity will be restored by 55 points.

Maxwell's maximum Health is only 75, making fights very dangerous if the player doesn't have good armor available. His Sanity regeneration bonus can also make it hard to stay insane and reap the benefits of that state.

In the Shipwrecked (SW) DLC, Maxwell's Puppets will aid him when hacking things with a Machete and they will have their own shadow version of the Row Boat making it possible for them to follow him across islands, unlike other Followers.

In Don't Starve Together, he starts the game only with his Codex Umbra and 6 Nightmare Fuel. His Sanity boost has been reduced from 20/min to 6.67/min. The Shadow Tab was added, in which one can craft the Codex and different types of puppets. Puppets cost 2 Nightmare Fuel, a tool matching their action, and 20% (worker) or 35% (duelist) of Maxwell's maximum sanity. Maxwell is also able to read Wickerbottom's books.