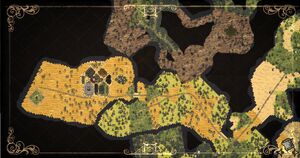 The Map is used to help navigate the islands of Maxwell's World. Nearly all resources such as Plants, Boulders and Beehives show up as icons on the Map. Different terrain types (often called Biomes) are clearly outlined, along with water. The Map shows Roads and Trails, as well as world objects such as the Wooden Thing or Maxwell's Door and built/crafted objects such as Backpacks and Farms. The map can be zoomed in for better detail, or out to see the entire world. The map is brought to view by pressing TAB. Pressing TAB again closes the map. On PS4, the map can be opened by clicking the touch pad. On Wii U, the map can be dragged on the gamepad.

When a world is first generated, the Map will be black except for the area immediately surrounding the character. As the world is explored, the map will be filled in. Generally, everything that can be seen on the screen will be added to the map as it comes into view, except for the corners which are slightly out of range. To be sure something is added, try to get at least half a screen away from it.