“A staff to freeze.”

“ITS MOLECULES ARE BARELY MOVING”

“Some kind of ice-throwing contraption.”

“It reminds me of home.”

“It makes me feel funny.” 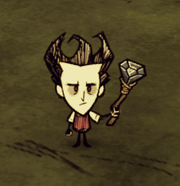 The Ice Staff is a Magic ranged weapon. It requires 1 Spear and 1 Blue Gem to craft and a Prestihatitator to prototype. It may also be found in an Ornate Chest or dropped by an Ancient Pseudoscience Station when struck with a Hammer.

When used, the Ice Staff temporarily freezes a Mob usually within 1-4 blasts. Small creatures such as Birds and Rabbits take one blast to be frozen, while big ones such as Treeguards take four blasts before they are frozen. Each use costs 5% durability, equating to 20 uses.

Each time Ice Staff is used, the character's sanity is decreased by 1.

Creatures that periodically drop things (such as Beefalo producing Manure) will still leave them behind while frozen.

In the Reign of Giants DLC, the Ice Staff can be used to extinguish smoldering or burning objects.

The amount of blasts needed to freeze a Deerclops is increased to six.

Mobs have varying resistance to the Ice Staff's freezing effect and may require several charges in order to be frozen.

Occasionally, an Ice Staff can be found surrounded by sleeping Blue Hounds: this is a Set Piece trap. When the Staff is taken, the player will lose 33 Sanity, it will rain, and all the Hounds will wake up and attack - otherwise, the player can walk among them safely. The Blue Hounds can be killed one by one while asleep before picking up the staff, and the others will not wake up. The Ice Staff will have a random amount of durability.