Don't Starve is a game with simple mechanics. At first, it may seem difficult, but following this guide should keep the player alive for as long as they want to continue playing.

The picture below is a labeled game screen with HUD, short for Heads-Up-Display. 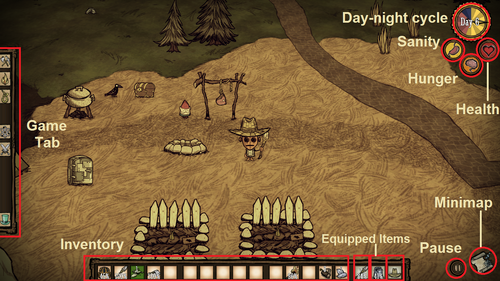 Displays how much damage the player can take. When it reaches 0, it causes the player's Death or Resurrection.

Track how full the character's stomach is. When empty, the player will experience constant health loss (similar to Freezing or Overheating ). This will continue until the player consumes an edible item that refills hunger or dies.

If the player keeps food for too long without eating it, the food item will begin to spoil and rot. The item in the inventory will start as a fresh (Green) item if it can spoil. It will first turn stale (Yellow), then spoil (Red), and finally turn into an inedible pile of Rot which can be used as weak fertilizer for Farms and Plants.

Each stage of spoilage will diminish the positive effects of the food and will eventually add a negative effect to it (i.e., Sanity loss). These effects do not apply to the character WX-78.

The spoil rate will double if the food is left on the ground, or it can be cut in half if it is placed in an Ice Box .You can also give it more durability by stacking it with fresher food.

With Reign of Giants the wetness mechanic is added causing food to become wet if not protected. Soggy food spoils 30% faster.

This keeps track of the player's current sanity level. When sanity drops, numerous things happen based on the current amount. As it falls, the screen will begin to distort and shake, and Eyes will soon begin to appear at night (Sanity 160). The distortion will continue until the Sanity level falls below 100. Below this, the player will experience their first  Shadow Creatures (Shadow-like monsters and Beardlings). If the sanity level drops below 30, the character will start to hold their head in pain, and the Shadow Creatures will begin to attack the player without provocation (except for Beardlings).

On the HUD, a circular object will show the player exactly how much in-game time they will have left before the time of day changes to Dusk, Night, or Day.

The day will slowly turn to Dusk, then Night, and then again back to Day. This cycle will repeat infinitely, but the length of each stage will change depending on the current season (see below).

Summer and Winter are the two seasons in Don't Starve (there are four in the DLC Reign of Giants; Autumn and Spring). During these seasons, the amount of Day, Dusk, and Night that will be left in a Day will differ.

Summer does not have much of a change from the games normal state besides the change in Day times. Winter however, is drastically different.

Winter is a very hostile season, so it is recommended that the player prepare before it begins. One of the easiest way is hunting Koalefant before the night starts when you find wait until night and kill it while it´s sleeping. You will get Koalefant Trunk which with 8 Silk can be turned into a Breezy Vest or with addition of 2 Beefalo Wool can be turned into Puffy Vest.

If players are looking at the Clock at night, a small moon phase can be observed. On a full moon, normal Pigs will become Werepigs, which are hostile and dangerous to players. Therefore, it is recommended that players not visit Pig Villages or befriend Pigs at night. If the player's camp resides near a pig village or in the center of one, the light produced during the full moon segment can be used to escape from the village before the Pigs turn. In Reign of Giants however, many things can happen on a full moon, which can be observed by going into a Deciduous Forest. The first change is that it is bright enough for you to stray from your campfire without being affected by Sanity drop or Charlie. Additionally, Mushrooms grow into Mushtrees, Flowers turn into Evil Flowers and a Unique Mob, Glommer, appears.

On Hand: For wielding Tools, Weapons, or Magical items.

Body: For wearing Armour, Dress items, Magical apparel, or different types of Backpacks on the torso.

Hat: For wearing Armour or Hats on the head.

Activated by pressing the Tab key on PC, View button on Xbox One, or the touch pad on PS4.

The Minimap shows the player their location and notable items (Spider Dens, Boulders, Pig King, Fire Pit, etc.) The map fills in when it is explored in the world.

Tabs that are used to Craft different objects (if the player has the correct resources). It also shows what items need to be unlocked and which resources are needed to unlock them.

Used to stop the game and choose an option from the HUD (Options, Save & Quit, or Continue.) The shortcut to do this is pressing the Esc key. This can be done on the Pocket Edition version of Don't Starve by pressing the pause button on the bottom right hand corner.

The method used to unlock craftable items. Players must gather enough resources before unlocking/prototyping an item. A type of Science Machine must be used for prototyping. Prototyping will increase your sanity a little.

If players have any inquiry, please feel free to read articles in the gameplay mechanics bar below or make comment below the page, editors will reply to your question.

The player does not start with any items. The first major concerns for players are Hunger and Night.

Note: Only attack these monsters if players are well-equipped to fight them, for example, having a Log Suit, a Spear and a Football Helmet. Also, prepare enough food (Berries) and/or healing items.

Swamp is a dangerous place, but you will need Reeds that grow there. Avoid Tentacles that can be seen hiding in the ground as you approach them. Be very careful! The Swamp is the most hostile area in the early-game.

Similar to Day 1. However, players are recommended to do the following thing:

Meanwhile, players are not recommended to consume Monster Meat (unless playing as Webber), and instead save it to feed Pigs (especially if you want to fight Werepigs for collecting more loot); otherwise just let it turn into Rot as fertilizer for Farming or use it in a Crock Pot to get rid of the negative effects.

Players may befriend Pigs by giving them a piece of Meat. Once befriended, they can help chop down trees and fight against Monsters. They might be very helpful to beginners, but players are reminded that pigs will turn into Werepigs in full moon phase.

Once a suitable location is found,

Fire pit is much better than the regular Campfire because players can see it on the map and if it goes out, players can restart it with a fuel. Also, players may build infinite food supplies like:

However, players should be aware of lightning, as it may burn bushes and tufts. Players may build a Lightning Rod to prevent wildfires. At the same time, continue to set traps for Rabbits and collect Seeds and Manure for farm plots. Any Beehives encountered need to be destroyed and rebuilt as Bee Boxes. Players may need a Beekeeper Hat in advance

Players may continue to mine or look for the Pig King, and exchange Meat for gold nuggets to use for more efficient tools. De-construct some Pig Houses with the Hammer. Continue to explore the map and bring back any resources found, be sure to immorally dig up any Grave you find as you may obtain an Amulet, but keep an eye on your Sanity. With all of the traps, food should not be an issue and with Bee Boxes you should be able to avoid dying.

Since Hounds are more likely to appear during this time, players may want to create a Log Suit and a Spear. With these armours, players are able to kill Monsters easily and take loot from them.

Around day 16, players may create a Meat Effigy in the

tab (but players will lose 30 from their maximum Health for each Meat Effigy built):