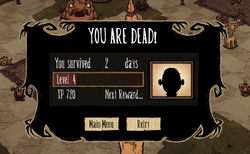 Experience is an in-game point system used to unlock new Characters. It is awarded on the death or level transition screen, and depends on the days survived. Each survived day adds 20 XP. Subsequent games add to the existing experience. Note that respawning at a Touch Stone or Meat Effigy does not give a death screen, so no experience points will be given at that point.

Wes, Maxwell, Webber, Wilbur, and Woodlegs are the only five characters that can't be unlocked via experience.